Huge, elegant, dramatic, and funky, Gothic hairstyles can express an array of things through the different kinds of hairdos that belong to this segment. These are a vibrant kind of hairdo that may not really appeal to many. Attractive in their own special way, these are really super-stylish and can turn many heads towards you with the kind of attention they draw!

Huge, elegant, dramatic, and funky, Gothic hairstyles can express an array of things through the different kinds of hairdos that belong to this segment. These are a vibrant kind of hairdo that may not really appeal to many. Attractive in their own special way, these are really super-stylish and can turn many heads towards you with the kind of attention they draw! 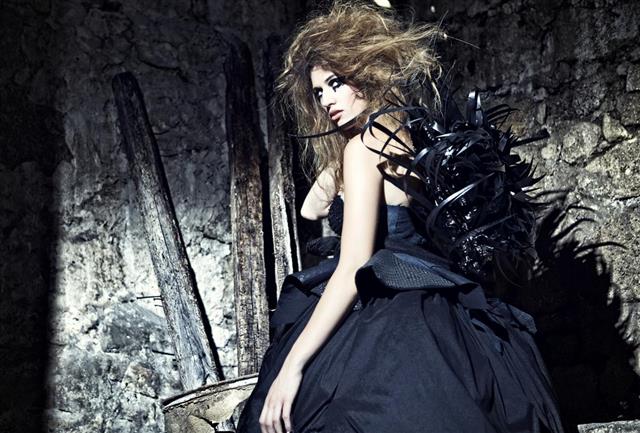 Goth can mean different things to different people. From medieval, Victorian, Elizabethan, to emos, vamps, and punks, Gothics can be anything and everything.

Gothic culture remains to be mysterious. It has its own unique aspects such as the development of art, music, and literature. The Gothics had their own way of expression, and it is believed that this culture, sometimes, tends to be on the depressive side. This does not always hold true though; Goth music has also dealt with good, thoughtful content, and although they are known to have a fascination for death, it is probably only their way of accepting it rather than ignoring the same. Gothic fashion, therefore, used black very elaborately along with other strong and vibrant colors.

These people always seem to have a sound reasoning behind every move. It is believed that the Goths had a large interest in punk music and even dark fantasy. Their hairstyles also varied in their look from the medieval period to the Victorian or even the pure punk style. Take a look at some interesting bits and bites about these hairstyles.

Gothic hairstyles in the 80s were big and had more height as well. These people were known to dye their hair black or use bizarre shades of red and purple. One can see that their hairstyles have a kind of romanticism and are striking at the same time. Mysterious to some, these hairstyles need a lot of crimping and curling to get the right effect.

There are two basics followed for Gothic hairstyles; generally hair is puffed up and piled on the head or it can incline towards the punk look. These hairstyles, therefore, suit women with petite features. Big hairdos were considered romantic when worn with corsets. For this, one needs to use a lot of backcombing methods to keep the hair in an upright fashion. The beauty about such hairstyles is such that they are wild and wacky and even gorgeous at times.

Who said Goths can’t be elegant? Show your true self with classy hairstyles like these. These are for short hair―a new twist to the usual bob!

This falls under the urban goth. All we would say for getting this look is―wear flashy clothes, accessorize, rather go in for an industrial theme.

Gothic punk hairstyles are all about individuality. A riot of colors could be seen especially in the 1970s. Vivid blues, reds, and zany purples! Show your uniqueness and creativity to achieve some interesting and bold looks.

The hime cut calls for straight side-locks and frontal fringes, but this is the synthesis of hime with goth, which gives us a lot of room for modifications.

Adopt the Japanese street fashion, go GothLoli! This 90s’ updo can have ringlets, straight hair, plaits, or pigtails. The only thing that’s mandatory for this look is blunt fringes! Achieve this porcelain look, and experiment with hair colors, wherein rainbow is the limit.

Slipknot and Marilyn Manson fans adore this look, for they are the real inspiration behind it. Shave off the sides, have explosive dreadlocks, color them, and get a lot of piercings.

An elegant twist to the regular goth. Braid up your hair and let it climb up your crown. Fix it there.

And the latest one …

Associating pink with the blond, the latest fad calls for coalescing gothic colors with conventional ones. You can experiment by having the sides shaved and getting pixies or bobs.

Why should girls have all the fun? Men too hold the right to adopt the cool, funky look. Do spikes, add a splash of color, go bald―anything and everything that makes you stand out can come under ‘the goth hairstyle’, but don’t forget to accompany it with gothic makeup―dark kohl eyeliner, metal accessories, black outfits, etc.

▶ If you wish to try out Gothic hairstyles, then you would need to bear in mind that one would need to use crimping, curling, and backcombing as the basic steps of such hairdos. The way you have to style and cut your hair would also depend upon the kind of Gothic hairstyle you are going in for.

▶ Hair extensions may prove to be a blessing in disguise for women who love to wear Gothic hairstyles but have short hair. These can be attached to the hair and can give you the choice of removing them as and when you wish to. These can help you style huge hairstyles with ease.

▶ Sometimes, having long hair can be bit of a problem when you want to try out such hairstyles. This is because the weight of your hair can make it difficult for you to balance a very large hairstyle. You need to consult your stylist to find out an alternative in that case. Getting your hair textured may prove to be one solution. Texturing your hair can help you to eliminate any excess weight of the hair. Texturing simply means cutting your hair at an angle. This adds loads of layers to it and reduces the entire weight of the hair, which will make it easier for you to have your favorite goth hairdo.

▶ Girls with short hair can also use backcombing methods to get the puffed-out look and even curling to complete it. Natural long hair would need to be trimmed if you are planning to wear your Gothic hairstyle for a long period of time.

▶ Sometimes hair rollers can be a big help to create such a look. Pin the loose curls around the head and let some long curls hang around at the backside.